Our travels took us to Fort Laramie National Historic Site, WY – the fort, not the town. Poor Greg was jealous – this is a great fort to visit – and we were wishing that he was with us too – we miss our own personal informative tour guide to places like this!
We stayed in nearby Guernsey, and drove to the fort on Sunday. It was a cold and blustery day, but we braved the elements to check it out. 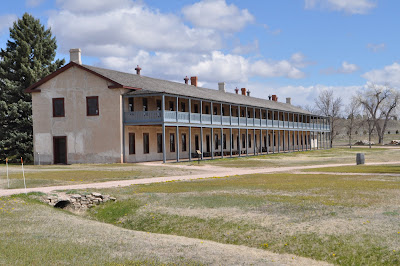 …the only remaining soldier’s barracks.
At the visitor’s center, we picked up Jr. Ranger books, watched the short film, and checked out the museum. Much of the J.R. books needed to be completed in the museum using the displays…

And then we had to go outside to visit some of the buildings to answer other questions in the books. I’m rather wimpy, and would have rather just sat in the van while the boys completed their books, but Emma and Savanna wanted to do the program also, so we were all off to walk the grounds…

It wasn’t too bad when you could get inside out of the wind. And most of the buildings had displays or refinished rooms that you could view. The guys liked the armory displays that were in the new guardhouse…

while us girls liked the furnished houses.
Fort Laramie is located in a beautiful valley on the North Platte River.

part of the ranger booklets were about the bats that live in the attic of one of the homes. A ranger mentioned that, because of the river, the mosquitoes are really bad in the summer. Maybe the wind isn’t so bad…
The building below is called Old Bedlam, and was the bachelor officer quarters – it is the oldest building remaining on fort grounds, and the oldest military building in all of Wyoming. It was in poor shape due to neglect, but the park service has restored it, and all the rooms are furnished circa 1850s and 1860s. One of the questions in the Jr. Ranger booklet was ‘how many fireplaces/stoves are in the building’. Supposedly there are 18, but I think that we all got more than that (and somehow we all got different answers)!

It was a quiet day at the park while we were there, but I think that it is a busy place during the summer, and then there are reenactors and lots of programs. We kind of miss those when we travel during the winter, but it is worth it to beat the crowds!

The barracks housed nearly 50 soldiers, and the upstairs was completely restored and furnished with all sorts of military paraphernalia… 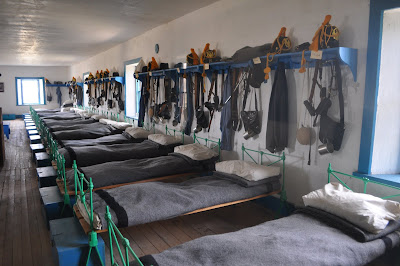 When the kids finished the program, we were off to turn them in. We felt as if we rushed through the fort since we were only there for about 2 hours, but there were a couple of reasons that we hurried our visit. One was the weather – the wind was cold and relentless, and we all had to bundle up with hoods/earmuffs so we didn’t get earaches. The other reason was the REST of the Jr. Ranger program. When we got our Jr. Ranger booklets, they were a little different than they normally are – while they are all unique, this one was 2 sided(!); one side was for Fort Laramie, and then you could turn the book over and upside down, and the other was for the nearby Guernsey State Park. And, the ranger was sure to tell the kids what they would earn if they did BOTH of the programs. Once the kids had been well-bribed, we had no choice but to complete the books in entirety! LOL! So, we finished the Fort Laramie part of the book, took the pledge and got Fort Laramie badges, and then we were off to keep working on those booklets.
Before we could visit Guernsey State Park, we had 2 quick stops to make. And they were right by our rv site. The first visit was to Register Cliff – which is a sandstone rock carved with inscriptions of names dating back to the late 1700s. 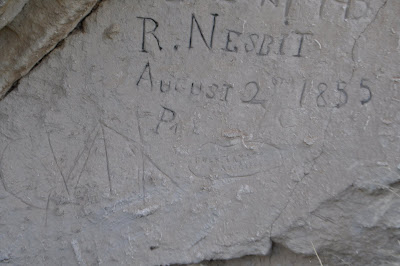 Much like El Morro in N.M., many of the carvings were made by travelers on their way through the area, and they were a varied bunch since Fort Laramie was a major stop for everyone from trappers to wagon trains to military garrisons. 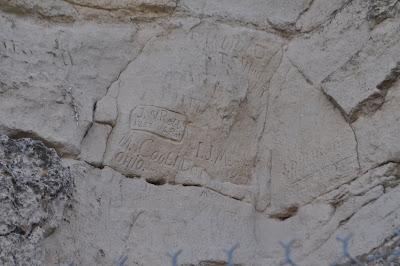 The kids had a few questions to answer based on what they found at the site. 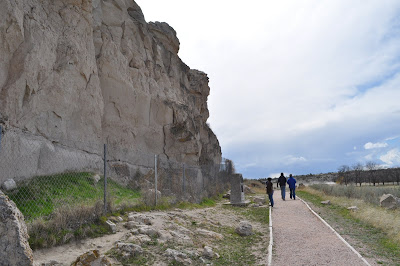 Next we were off to the nearby Wagon Ruts. Left from the wagon trains traveling to the west, these ruts are up to 5 feet deep in some places. 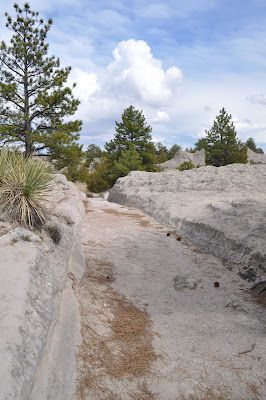 They are not just ruts from the wagon wheels, tho those defined the outside boundaries, but the inner part of the trail was also worn down from people walking and the animals that trailed behind the wagons.

The wagon ruts have a nice little paved trail that lead right by the ruts – a short and easy loop from the parking lot.
(just a note, you can start the program at either the fort or the park, but you must do the cliff and ruts in the middle as you cannot get or turn in booklets at either of those places)
Then, after the kids finished those 2 pages, we were off to the CCC built Guernsey State Park visitor’s center. To get there, we had to pay a $6 vehicle entrance fee to the state park, then drive over the dam…

and drive 5 miles or so up the road to the visitor’s center. (note to RVers – the dirt road and parking area is not RV friendly, at least not big rig, but there is a boat ramp parking lot at the bottom of the road, and it is a short, uphill walk…)
The visitor’s center was built in the late 1930’s by the CCC (Civilian Conservation Corps) to the tune of $3200. (nope, that’s not a typo)! The “tree army” used local building materials, except for some cypress from Florida (no-one has figured out why they would use wood all the way from FL, but it is some neat looking wood!!!).

(it’s much bigger than it looks in the pic)
Here, the kids had several pages of information to find out via the displays in the visitor’s center, and it took them a bit of time to complete them – and some of the kids, like Peanut, couldn’t concentrate because they were much more interested in the dead mouse in the mousetrap in the corner. The center is open seasonally, and May 1st (the day we were there) was the first day that they were open for the 2011 year; and therefor the first day we could do the whole Jr. Ranger program!

Some of the questions were a little tricky, but the kids ‘help’ each other out to find the answers…

By the time that we had finished the fort, the cliff, the ruts, AND the state park, it was 5:30 – thank goodness the park didn’t close until 6! (and that we had paid for 2 nights at the rv park)
The things that we do for our kids! LOL!
The reason that they had to do both programs???
Because Wyoming has THE COOLEST metal state park Jr. Ranger badges!!! (on the left…)

the little boys were totally stoked because they look like Texas Ranger badges, and are metal (like TX ranger badges…) my boys have always loved to get different replica sheriff badges for gifts, maybe that’s why they liked them so…
PLUS, if you did both programs, you got this neat coin! Dual sided, one side featured Guernsey (with a pic of the visitor’s center), and the other side was of Fort Laramie (with a pic of Old Bedlam). What a neat souvenir!!! (and it even came in a protective plastic case!) Score!
Sometimes I feel a bit guilty that my kids’ motives at doing all the Jr. Ranger programs is to ‘get’ something. But, then I remember how much I detested doing schoolwork that had no apparent purpose – the teacher would look at it for a second, grade it, and then toss all that hard work into the trash can. Guess a plastic badge is OK for the work that they put into the programs – and I know that they would do some (tho not all) of the booklets without the badges – at least for the sites that they are really interested in (like forts…). And I find that the longer they do the programs, the more interested they are in doing them just to do them, and not so much for the badge (the patches, yes, the badges, eh, not so much…)
And, I’m really glad that the park system offers this program – my kids have learned so much more both from completing the questions in the booklets, and just picking up other information through reading displays looking for specific answers. I think that I can honestly say that the kids (and us too) get much more out of each park because of the program than we would just by visiting and but not participating.
And goodness knows, we wouldn’t go to work every day without our own ‘carrot of incentive’, so I don’t feel too guilty for too long… besides, it’s one good thing that the gov is doing with my tax dollars (and if I happen to think of any other good things, I’ll let you know… 😉