We stuck around southern Colorado a few extra days because we really wanted to go to Capulin Volcano. I had already told the little girls about their pre-reader Jr. Ranger program, and the fact that they could earn LADYBUG BUTTONS, and they were so excited that we would not NOT go (OK, we could have skipped it, but they would have been so bummed that we really wanted to take them 😉

Capulin seemed quite a drive from I-25, but it really wasn’t that far – just lots of road construction and not great roads…
Even though it is surrounded by other volcanoes, it would be hard to miss… 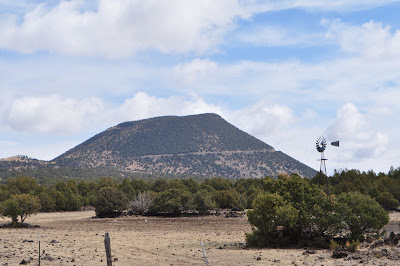 We stopped by the visitor’s center and picked up ranger booklets for the boys, and the ladybug scavenger hunt papers for the little girls…

They were great for the girls – the whole thing was spotting ladybugs, deer, birds, flying insects, specific trees and plants… and drawing something that you saw on your visit…

This program is unique because you earn a badge for the booklet, (or a ladybug button for the scavenger hunt), and then, if you hike the rim trail, you earn an activity patch.
Next we drove to the top of the volcano – it is not a fun drive – it is on a skinny (tho 2 lane) paved road next to the edge of the mountain (read cliff), without guardrails and only these puny little pinion pine shrubs to try to stop your fall. The kids started the old, “don’t look down mom, just don’t look down!” joking. And later, talking to one of the rangers, he said that the only problems that he really has with visitor’s in the park has to do with that road. Some visitor’s will drive on the wrong side on the way up (so they are on the inside), and since it is continual spiral, people coming down will find a car coming up the mountain in their lane. And once you start on the road, there is no turning back (or pulling off for that matter). One lady with 2 little kids drove to the top in the wrong lane, and when the ranger when up to talk to her, found her parked in one of the bus spots (which are as far away from the edge as you can get) – she begged him to please not ask her to move her car, she just couldn’t. The ranger ended up moving her car for her, and even offered to drive her down off the mountain. Poor lady must have been having an anxiety attack!

You would think that we have been in northern New Mexico long enough to know that you do your outside walking at the parks in the morning, before the wind picks up as it seems to do every afternoon. But no, we had to work on our books first, and by the time we drove to the rim (eating lunch on the way), a storm was moving in. The boys did the parts of their booklets that they needed to do from the plaques in the parking lot…

and then they did the quick little .2 mi. (ea way) walk down to the crater vent; which is an 105 ft decent. They had to count how many steps it was for their booklets. 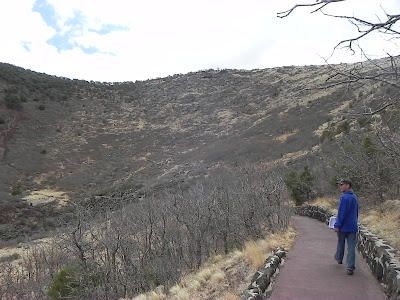 For being millions of years old, this mountain shows precious little erosion!

Vaughn and I, along with Peanut, Joel, Daniel, Jacob, and Eli started on the one mile rim trail loop. It looked to be an easy hike, but by now the wind was howling, and it was freezing out! Peanut and I didn’t get far before we (me) decided we’d go sit in the van and visit the big girls (and look for flying insects from inside the van!). Dad and Joel weren’t far behind! But Daniel, Jake, and Eli persevered! (those 3 tiny dots on the top of the rim in the middle of the pic below are them…)

They were determined to earn those patches! It looked like a long way around, but they didn’t take long at all!
They were rewarded by breathtaking views (tho maybe it was the freezing, howling cold wind that took it away!)

and they got to see the view from the top in all directions!

It didn’t take them long to walk the rim – probably the spitting snow helped hurry them along 🙂
Once the boys got back to the van, we headed down the mountain and back to the visitor’s center to get our booklets checked. The guys got their badges, Eli, Jake, and Daniel earned the healthy activity patches with a hiker on them, and the little girls got their coveted ladybug buttons (which are one of their favs!)
We were glad that we stuck around and checked out the volcano, but we were anxious to move on. We drove back to Trinidad, CO, picked up the 5th wheel, and moved up the road a bit to Colorado Springs. We are not big at planning ahead, and the only RV park anywhere near Colorado Springs was a Jellystone south of town – at $60/night; we were pulling in at 7 pm and all we wanted to do was sleep there and move on. We decided to Cracker Barrel it. It is typical for our family to rack up over $20 in extra people fees per night at RV parks – the longer we travel, the more I think that is excessive – especially when all we are doing is sleeping and heading out, not using their facilities. So, we spent Monday night in the Cracker Barrel parking lot so that we could visit a local ministry on Tuesday… We had only been in Trinidad for 3 nights, and we hadn’t moved far, but it felt good to be in a new town! LOL!