On our way back home, we made a couple more stops.
We pulled into Rapid City on Tuesday (the 28th – yeah, I’m way behind!), and parked at Cabela’s. We had actually tried to find a campground by calling around before we got to town, but all the ones that I had called were not yet open; most campgrounds there open on May 1st. So, we just pulled into Cabela’s, and once we were parked, we stayed there instead of moving again.
We believe in supporting our campgrounds, so we went shopping… 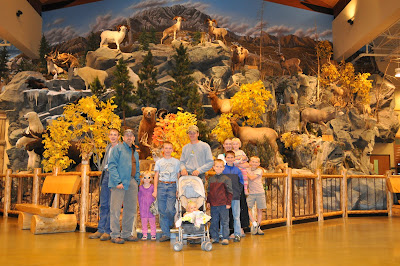 We picked up a couple of items including a birthday gift for Daniel.

The next morning, it was off to Mount Rushmore.

We spent the morning there checking out the Hall of Flags, looking at the monument, and going through the visitor’s center. 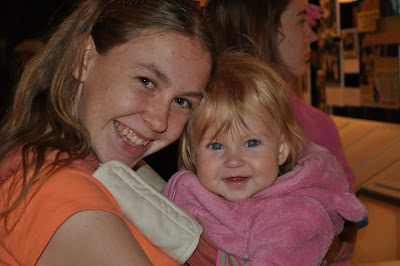 We watched a couple of movies – the one about the monument was interesting, but the animal one was lame (maybe it would be good if you lived in a high-rise in Chicago…).

Found this little plaque interesting – course, we like to read into things, and when the headlines are about the Big O chastising 80% of Americans for not supporting everything that he wants to do… (sorry – soapbox…hehehe!)

It was a beautiful day – a little windy, but the sun was shining (and it wasn’t snowing yet!)

On top of Theodore Roosevelt’s head was a cleaning crew. One of the rangers said that they were cleaning the faces as a team was coming (from Switzerland?) to scan the monument. The scan would record every measurement of the monument so that if anything were to happen to the carving, it could be replicated.

This ranger was great – he quizzed the kids to make sure that they really knew their info instead of just copying it down.

When we were walking up to the monument, there was a mountain goat alongside the path. Then, when we were leaving, there were 3 more right by the exit…

The baby was so cute! And they didn’t care a hoot that we were so close (we were in the van).

We are really glad that we took the time to stop by Mount Rushmore! The kids learned a lot about the presidents – more than just the 4 on the monument, and we got to see some beautiful country.

It was getting time to be home – I could tell because when we all got out of the van at the monument, we just stood around smelling the air. Hmmmm….pine trees – smelled like home. I think that I was getting a little homesick! 😉