The day after touring Boone Hall, the boys wanted to go to the USS Yorktown. They said that they would rather go to the carrier than Fort Sumter. 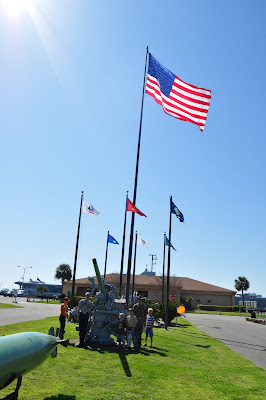 The size is impressive – the guys had not been on an aircraft carrier yet!

The original USS Yorktown was sunk at the battle of Midway byJapenese aircraft in 1942. The US commissioned the new USS Yorktown carrier in 1943.

At Patriot’s Point, there is usually another ship, the USS Laffey on display also, but she was at another location getting some maintenance done.
The submarine USS Clamagore is moored next to the Yorktown. TheClamagore is a 322 foot diesel powered submarine which was commissioned in 1945, just weeks before the end of WWII.

USS Clamagore was decommissioned in 1975, and became part of Patriot’s Point in 1981. 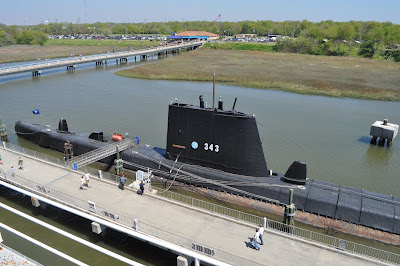 The boys were pretty excited to tour a real submarine. They found out that the sub was manned by 80 sailors, and they were surprised at the close quarters that the soldiers had to work in…

The boys even pretended to eat in the mess hall.

In the submarine, there was an area with a sign that listed all of the subs that are ‘still onpatrol’. It lists all the subs sunk in WWII…

and the wall is lined with plaques – one for each sub, listing her crew…

It was great to have free reign of a submarine!

The Yorktown went through some modifications over the years, including an angled deck for jets, and then she was converted to an antisubmarine carrier. She served in the Vietnam War in the 60s, and recovered the Apollo 8 astronauts.

The Yorktown was decommissioned in 1970, and came to Charleston in 1975 to be dedicated as a museum. And she makes an awesome museum!

The ship houses 3 hangar bays with over 15 different aircraftonboard.

The airplanes were housed both above and below deck.

I had picked out 2 different aircraft pictures that I might put on here, and asked Greg which kind of airplane was better. He looked at me, said, ‘for what?’, and he starts listing off the pros of each. I asked him which one he liked better, and he couldn’t make up his mind, so I finally asked him which one I should put on the blog, and he said both (like…DUH!).

There are several parts of the ship that are open to the public, and house things like ship models…

But the best part of the Yorktown is the Medal of Honor Museum. It is an area that is set aside just for recipients of the Medal of Honor. Did you know that the youngest recipient of the Medal of Honor was a 12 year old drummer boy in the Civil War? (I didn’t either) There were lots of different exhibits listing men who received the medal in each war. There is even a touch-screen where you can look up a specific soldier, see a picture of him and read about his heroism. 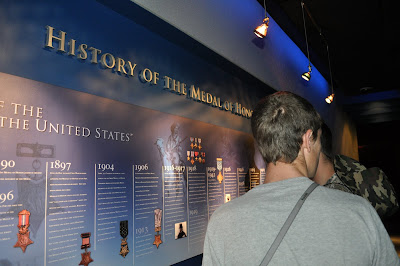 Seeing the aircraft on the deck put the size of both in perspective (the carrier is HUGE!)

Patriot’s Point is also home to a true-to-scale exhibit showing the living conditions of a naval support base in Vietnam. They have a river patrol boat, helicopters, and other artifacts from the Vietnam War.

Patriot’s Point is a great learning experience for young (and old!) history buffs! My boys, big and not-so-little) love to learn more about the United States’ roles in past wars, and this museum was extra educational. It had a lot of interactive exhibits, which always helps the little boys with retaining what they have learned.

Most of the boys think that this was the best overall stop so far on our trip!

My guys always enjoying touring the ships and military sites that we are visiting, but it is also sobering and humbling to come face to face with the sacrifices that these soldiers made on our behalf. May we never trivialize, minimize, or forget what they have paid that we may be free. And may we never apologize for doing what is right when it comes to protecting our freedom, or helping others attain theirs.
Any nation that does not honor it’s heroes
will not long endure.
Abraham Lincoln