Thursday (April 1st), we got up and drove to Boone Hall Plantation. As we were driving into the plantation, sitting in line to buy our tickets, Vaughn remarked how the guy a few cars ahead of us handed the attendant a coupon. Vaughn asked where our coupon was, teasing me because I love to coupon! Having the laptop already running, I looked one up online — I couldn’t believe that I hadn’t thought to check for one before! I hadn’t brought the printer, but we told the lady about the coupon and she gave us the $2.50 off of each of our tickets! Hey, $25 is $25!!! 🙂 anyway, we thought that was really nice!

Boone Hall is one of the oldest working plantations in North America. It still keeps approximately 100 acres in crops to help keep the taxes down. The plantation is privately owned, and the owners live in the house when they are in town. 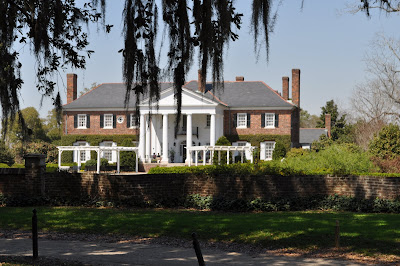 The plantation is famous for it’s tree lined approach…

These massive oak trees were planted in 1736!

Boone Hall is said to be the most photographed plantation in the United States – I can see how, and bet that most of those pics are of the entrance!

There used to be a brick yard on the grounds of Boone Hall, where the plantation slaves produced up to 4 million bricks a year. Some of these bricks were used to help build Fort Sumter.

Some of the bricks that were made were flawed, and couldn’t be sold, so they were used in the construction of slave cabins. Originally, there were 27 cabinson site, but some were dismantled over the years so that the bricks could be utilized elsewhere. There are still 9 cabins remaining. 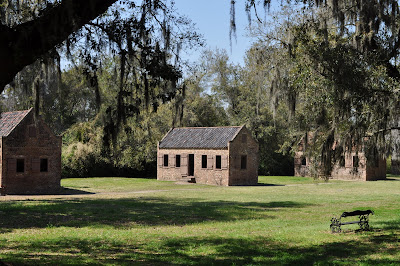 Every one of the remaining slave quarters is open to the public, each having it’s own exhibits based on a time or different aspect of the Gullah culture; things like quilting, worship, work expectations as a slave,basketmaking…

Gullah is a unique culture that was adapted by the African slaves here. The cabin farthest from the plantation house is the location of a Gullah presentation…

Jackie’s presentation was definitely the highlight of our visit! She was wonderful!!! Her program told about the life of the slave, details about how they were treated, what was expected of them, what life was like on their own time, and wove she their belief of God in throughout the story. She then told a story – telling the first half in everyday English, and the second half in Gullah. It was great! Everyone hung on her every word, both because you really had to listen at first to understand the words, but also because she was so entertaining! (we thought about watching her program again!) She has a great sense of humor, and is very congenial – you felt right at home around her.

The plantation has multiple outbuildings, and is a popular location for weddings – they are already booked for 2010. It is a beautiful place!

Located next to the main house, the gardens are full of beautiful flowers; I spent the entire day sneezing 🙂 -but still enjoyed my visit very much. The pollen has bothered Vaughn a little, but we are so thankful that it doesn’t seem to affect the kids at all.

We went on the half-hour tour of the house. Because the main house is still a private residence, the tour is only of the bottom floor, and no-one is allowed on the second story. Our guide was a friendly lady in colonial dress.

It seems so strange to be in 94 degree weather, in a flower filled garden, on April 1st! I think that it is about 40 and snowing at home!

Everything is so green here!

Later on in the afternoon, we went on the covered coach tour. The tour drove us around the plantation showing the current crop fields, showing us what was left of the pecan grove that produced pecans untilHurricane Hugo went through in 1989 and took out most of the trees.

The 6th episode of Roots (I’ve never watched it) was filmed on Boone Hall. When the show was finished, the producers left the little house where they had built it for filming, and theplantation now uses it for storage. It’s quaint, sitting out there in the midst of all the natural vegetation.

We had a great visit to Boone Hall – just don’t touch thatspanish moss! We were able to go to all of the programs and wander through the plantation. During the summer, there is also a butterfly house.

Visiting a plantation was one of the things that I wanted to do, and we all enjoyed our day. It does seem odd to be slathering on the sunscreen, and watching the little ones for sunburns when we would usually be stoking the woodstove at home!
After finishing up at the plantation, we drove around to the Boone Hall Marketplace. In season, it specializes in plantation crops. We ended up buying some spice mixes and some fruit, and then went back to the camper to sit under the air conditioning! 🙂