On Friday the 9th, we drove to Appomattox Court House National Park. Appomattox is where Lee signed the Confederate Surrender that would end the Civil War.

The area is now a National Park. When we arrived, we found out that we had, unawares, arrived on the 145th anniversary of the signing! There were all sorts of interactive programs going on, and there were reenactors sharing their stories with the visitors. 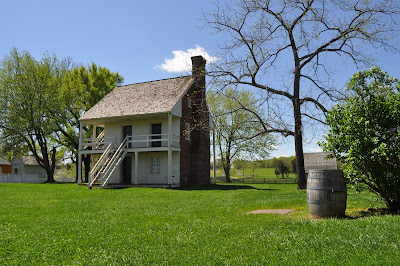 According to ‘Mrs. Peers’, the date was April 12, and she was happy to tell us all what happened ‘last week’ with all the fighting and the Confederate surrender by Gen. Lee. Mrs. Peers was a little concerned for her house because the troops had destroyed her front steps with their cannon recoils, but the troops were rebuilding them for her. Mrs. Peers is a ‘southern lady’, and is hoping that all these Union soldiers will soon leave their town. 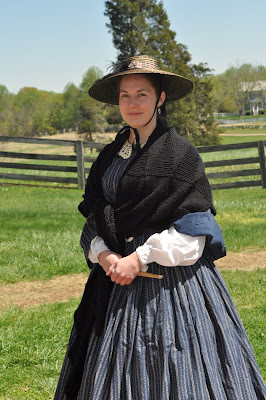 I love it when they have reenactors like this – ones that won’t answer you if you ask something other than what their character would be knowledgeable about. Mrs. Peers did let us take her ‘image’, and she was surprised by how quickly it set – usually you have to be still much longer 😉

The kids did the Jr. Ranger program (of course!)

We were able to tour the McLean house, where Gen. Lee sat down with Gen. Grant to sign the surrender terms… 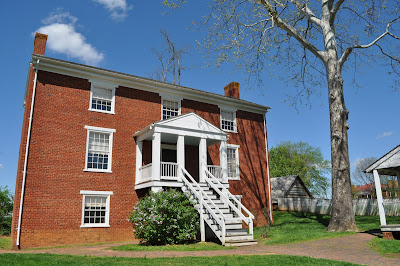 And this Union Private in the 85th Pennsylvania Infantry, was very informative also. This Yankee told us all about life in the military, how they have been living, and how much he dislikes the south with it’s bugs and crocodiles.

both of these reenactors were so well versed in their roles – they carried them out flawlessly, and both had a great sense of humor. We enjoyed their programs very much!

The park service has preserved much of the ground that the battle took place on.

The room where the surrender terms were signed has been restored, as close as they can, to what it looked like at the time.

There are quite a few original, restored buildings on the grounds, like Mrs. Peers house – there is still a cannon resting in her yard. Her husband says that it must stay as a lawn ornament until the troops come and claim it. She isn’t very happy about it!

Along with their badges, the kids were given ‘parole passes’. Parole Passes were given to Confederate soldiers that surrendered at Appomattox. These passes gave them safe passage home as long as they promised to not join the Confederate army again. They could show the passes at stages, ferrys, and railroad stations for free passage home. They could also be used to get free rations from Union troops on the trip home.

We also learned that when a town became the county seat, and housed the courthouse, then the town was usually renamed. Appomattox originally had a different name (which I can’t remember right now), but was renamed Appomattox Court House when the county seat was moved here. Many people think that the surrender terms were signed at the courthouse here, but they were signed in a home. If the name is stated as Court House, then it is the name of the town; if it is courthouse (one word), then it is speaking of the courthouse building…
Appomattox was absolutely beautiful! I love the Civil War timeframe, and am really appreciating understanding the causes of the war better. We are anxious to visit more historical sites from this era.