Lazy morning – slept in until 8 then walked the beach a little and back to the hotel. On the way out of their room to go to the dive shop, the guys met the man staying in the next room – and he was also from Montana and knew our asst. pastor! Small world!

At about 10:15, the guys picked up their snorkel gear and the boat headed out for the reef, which was only about a 5 min. ride. Their guides name was Daniel, and they would be snorkeling with a couple from England, and another couple from New York, all very nice people. This would be Vaughn and Greg’s first time snorkeling, and were surprised at how easy it was!

Their first dive was a big loop through a lot of coral (which you are not supposed to touch). The water depth varied from about 15 ft. to just 2 or 3 ft. The current was somewhat strong, but the fins on their feet really helped them to move through the water. They saw countless fish, and the fish and the coral both were beautiful.

The next little dive was at a place called Shark-Ray Alley. They pulled into the area and the boat was
very quickly surrounded with rays. Daniel shut the motor off and briefed the divers
about swimming with the rays; they are very peaceful and will not harm you: you can pet them but not on their underside, don’t grab their tails or they may swim away and their barbs will tear your hand up, and do NOT step on them or you will get a souvenir (a sting ray barb, and the only way to get rid of it is to cut it off th

e ray)…
After the pep-talk, Daniel said that he would call the rays in for the divers. He fired up the motor on the boat and reved it up a few time and within seconds the water was swarming with rays. Apparently they feed the rays and the sound of the motor is their chow call! 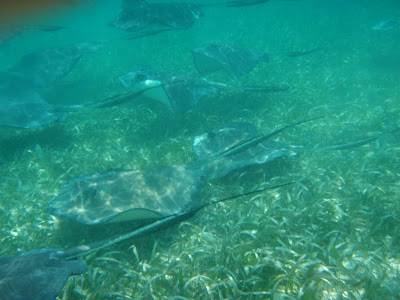 There were rays everywhere, and while they did look mean, they were not at all aggressive.

was shallow here so the guys could walk around too. V & G swam away from the boat a little and came across a 4 ft. barracuda that was attracted to Vaughn’s camera; it came within about 3 feet before V. got a little nervous of those razor sharp teeth and put the camera away.
At the third dive site, they swam another big loop and saw lots more fish — some very unusual ones that looked like something off of a Discovery Channel show.
Headed back to land; 3 hours was just the right length.
Playing the part of a vacationer is hard work and they had to go back to the hotel for a nap! 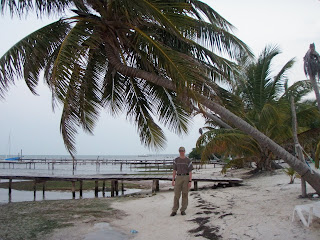 Walked the island some more and decided on ‘Fran’s’ for dinner. Apparently the food was FRANTASTIC – they shared a seafood platter (fresh red snapper, barracuda, and shrimp) with rice and potatoes, strawberry cheesecake and 2 Cokes for $20us.