Got up early this morning, checked out of the Copa Banana, and the taxi showed up at 6 to take them down to the docks to catch the Thunderbolt to the cayes. When they got to the dock, the big water taxi had to wait for nearly an hour for some band that was also getting a ride. The seas are rough this morning, and V & G are thankful for Richard’s advice to sit as far back in the Thunderbolt as possible; the front of the boat absorbs the shock of hitting the waves and the ride in back is much smoother. The boat stopped at Sartenja to let a few riders off, Sartenja looked like a pretty little village, and V. would like to go back and check it out someday. Then proceded to San Pedro. The guys got off of the Thunderbolt at San Pedro, and got a taxi to the other side of the island where the water taxi dock is. 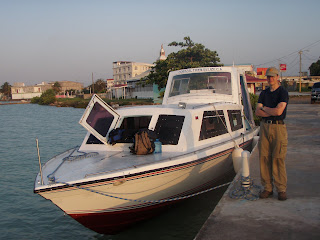 The water taxi had left just a few minutes before V & G arrived, so they had a little time to wait for the next one – spent it on the beach, and bought cinnamon rolls and O.J. for breakfast. Caught the next water taxi to Caye Caulker which was about a 20 min. ride. Arriving at Caye Caulker, the guys caught another taxi (a golf cart) and went to check into the hotel that had been recommended to them. This hotel was full which ended up being a blessing as it seemed to be in a much noisier (partying) part of the island. The men had the golf-cart taxi take them to the Rainbow Hotel (not quite as nice, but the a/c worked and it was fairly quiet), and they checked in there.

hen around the town to check out the surroundings. One end of the island, there are no beaches, just short concrete retaining walls to keep the ocean waves from eating away at the land. Along this side, they saw lots of little fish including gar, rock bass and barracuda, and some anoles. Also lots of pelicans, frigate birds, crabs, and lizards.
There are boats everywhere, and there were also several guys using para sails to pull them around on what looked like wake boards; they were cruising!

There are very few vehicles on CC, nearly everyone uses golf carts and bicycles, and according to Greg’s journal, they have have problems with people texting and driving at the same time also!
The guys set up a 3 hour snorkel trip for the next day. Cost was $45us for both of them and included gear, bottled water for drinking, a snack of fresh fruit, and the fees for snorkeling in the reserve (protected area of the reef). 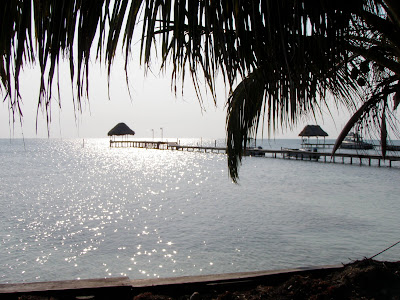 nd somewhere to eat. About 7pm, the streets grow alive with BBQs! The men stopped at Rose’s Grill for dinner – seemed to be a popular place, and got even busier the longer they were there. You choose a spot to sit at long tables that everyone shares, then approach the ‘grill master’. This is the man that will cook your food for you on an open grill (lengthwise half of a barrel with a grate over it). At Rose’s, the grill is situated along the edge of the dirt street; to the left of the grill is a long table covered with various fish. These are fish that were caught that day, and bought from the fisherman by the restaurant for tonight’s use (it is suggested to buy fish with the head on as it is easier to judge the age of the fish). The fish are available whole, with heads off, and also (for larger fish) already cut into various sized steaks. There are also shrimp kabobs with veggies there, and chicken. You go up to the table, and pick what you would like the grill master to cook for you (he can tell you all the various prices of the fish based on size/kind). The guys picked large barracuda steaks which the grill master kept marinating with some concoction while he was cooking (don’t be in a hurry to eat!). Their meals each consisted of the barracuda steaks they had chosen, garlic potatoes, coconut rice, and a Coke for $12.50us each. “It was worth every penny!”

Back to the hotel and to bed.